I took the last few days of the working week off and combined with yesterday we managed to make a good start on getting the stable erected. I had hoped to get all the frame upright after the 4 days, but we were rained out on the 1st day and the 2nd day was spent finishing attaching each section while it was still on the ground. The 3rd day we erected the first section, only to run into woes when attempting to get it all plumb. We'd marked out the distances between the column footings from the plans, but when we got it standing up it became obvious that things weren't going to be milimeter perfect.

So yesterday we had to drop the section we'd put up and attack things from a new direction. This time around we unconnected the side sections and braced the central columns so they were parallel before standing it up. This also helped to stop the apex drooping and throwing everything out of wack. Once we had the center of the 1st end up, plumb and bolted to the footings things became a lot easier. As you can see from the photo we finished the day with 2 sections of frame up and have braced them together. 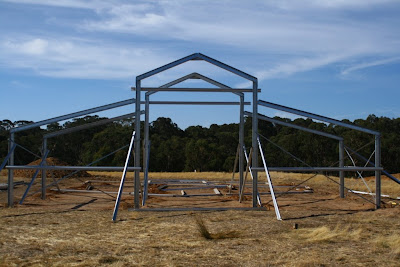 Alas there won't be any more progress until next weekend, but I'm damn happy to have made a decent start on the project. I'm also rather sore :)